Want to find out how to vape cannabis? Wondering what benefits it has over other common ways of medicating such as smoking or dabbing? In this post, we’ll teach you all you need to know about vaporizing cannabis, the benefits that come with it, how to use a vape pen, and how they actually work.

Best of all, use the promo code at the end of this post and you'll receive $20 off your first FOUR orders on GreenRush.com

How to Vape: The GreenRush Guide to Vaporizing Cannabis

Vaping cannabis has become a recent trend among patients and recreational users. The reasons behind its growing popularity are varied; many choose it over traditional ways of medicating for health reasons, while others simply find it to be more pleasant. Some also enjoy vaporizing because it provides a stronger effect than smoking or dabbing.

To better understand how to vape, let’s start by looking at what a vaporizer is and how it works.

What Is a Vaporizer? 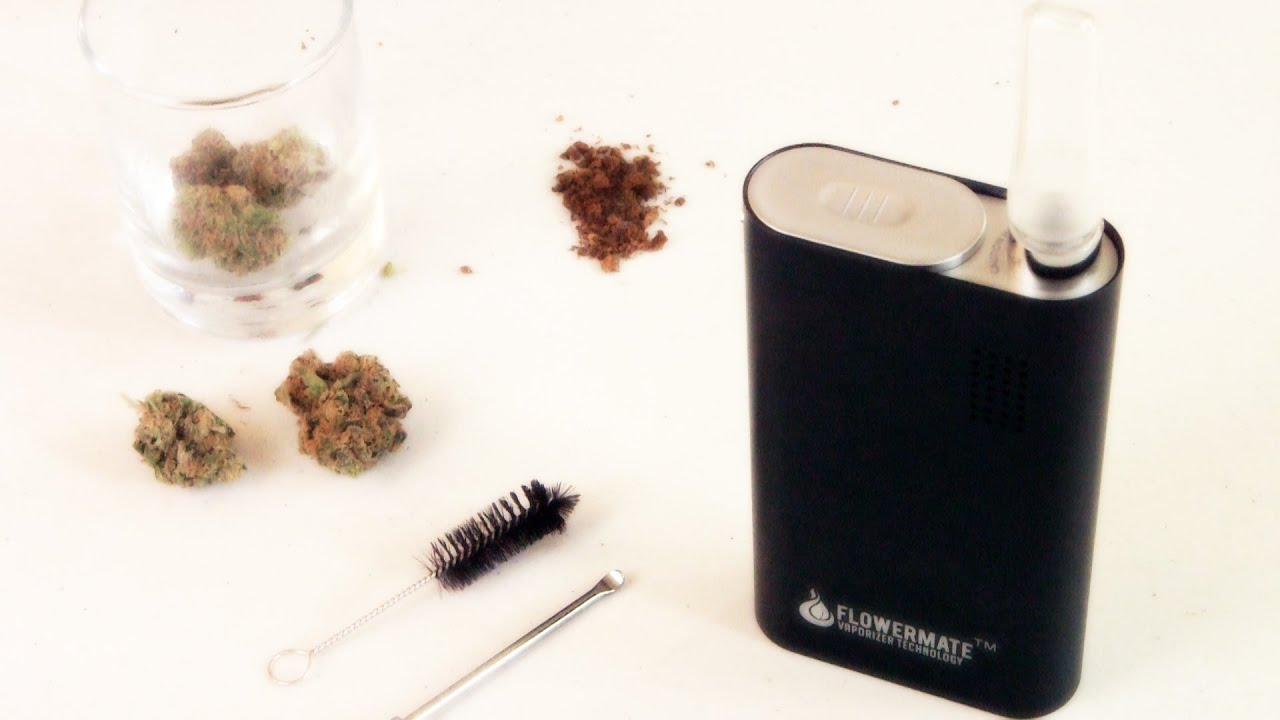 A vaporizer is a device used to extract the active compounds of a plant or chemical. Vaporizers can be used to vaporize cannabis flowers and concentrates, tobacco, and other herbs. They can also be used to vape chemicals such as tobacco-free nicotine commonly used in e-cigarettes.

Smoking cannabis involves combusting flowers or concentrate and inhaling the smoke that is created through the combustion. Inhaling smoke of any kind causes irreversible damage to various parts of the body. The act of inhaling can also be unpleasant for users, especially if they do not smoke regularly.

Vaporizers offer an alternative to traditional ways of medicating such as smoking/dabbing and aim to minimize the negative side effects associated with inhaling smoke and offer a more pleasant experience.

How Does a Vaporizer Work? 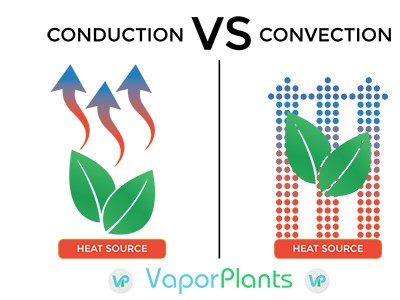 Vaporizers work on the principles of convective or conductive heating.

Convection heating refers to the transfer of thermal energy through a liquid or gas. Convective vaporizers work by heating the air around the cannabis to a temperature where the active compounds within the plant begin to convert into vapor. That vapor can then be inhaled by the user without the many nasty side effects that come with inhaling smoke.

Convective vaporizers are generally more expensive than conductive models. They provide even heating and far less chance of combustion. They are also super simple to operate. However, they usually take longer to reach their ideal temperature.

Conductive heating refers to the transfer of thermal energy through a substance or solid. Conductive vaporizers work similarly to dab rigs; cannabis is placed on a preheated surface and the active compounds within it are slowly converted into vapor that is then inhaled by the user. The user will generally have to shake the vaporizer between tokes in order to evenly heat their medicine.

Conductive vaporizers are usually less expensive than their convective counterparts and also warm up a lot faster. However, they can be harder to operate properly (especially for beginners) and feature higher risks of combustion. 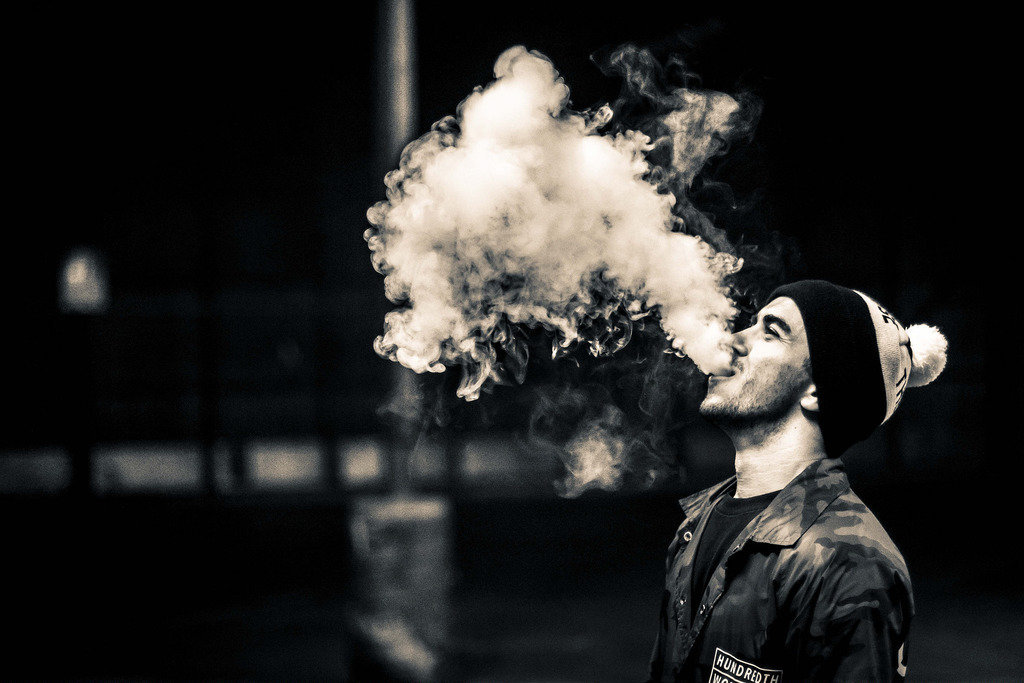 The most important part of vaporizing is temperature. In order to know how to vape, it is vital you understand the temperatures at which the various compounds in cannabis begin to vaporize.

In a recent article by Leaf Science, Dr. Arno Hazekamp, medical cannabis researcher and Head of Research at Bedrocan BV in the Netherlands, suggests 410° F (210° C) is the ideal temperature for vaping.

“In general, I would say 210°C is the best balance between efficient evaporation of terpenes and cannabinoids and smoothness of the vapor,” he says. Other sources, however, suggest vaping around 375°F to avoid the risk of combustion.

The process of vaporizing varies depending on what vaporizer you use. Below we outline some basic steps on how to use a vaporizer. If you’re using a pen, scroll down a bit further for a separate list of instructions, you hip bastard.

However, the steps below serve as a solid guide on how to prepare your medicine and vaporize correctly:

Start by setting the temperature in your vaporizer to 410° F (210° C). Do not set your vaporizer above 455°F (235°C) or you risk combusting your cannabis, at which point you’ll be exposing yourself to the same chemicals found in smoke.

Note: It is a misconception that wetter, stickier flowers require begin to vaporize at a higher temperature. They will just take longer to reach their ideal temperature.

While your vaporizer is preheating, start preparing your buds. It i super important that you grind your cannabis really finely in order to expose as much surface area to the hot air as possible. Inserting a whole bud into your vaporizer will not work as the air will not be able to heat the inside of the bud.

Next, pack the bowl of your vaporizer with your ground buds. Make sure not to overfill the bowl or pack it too tightly.

This step will vary depending on what vaporizer you are using. Please consult the instruction manual specific to your model.

Again, the instruction manual of your vaporizer will specify how long it will take for your buds to reach their optimal temperature. We generally recommending 1-2 minutes before taking your first drag.

Once you have waited at least 1-2 minutes, take a drag of your vaporizer. If you’re getting nice, thick vapor, you know you’re ready to go. If not, wait a few more minutes. Remember, do not increase the temperature above 375 °F.

How to Use a Vape Pen: Vape pens work on the same principles as standard vaporizers, but the process of using them varies slightly. Use the instructions below as a rough guide on how to use a vape pen:

This is a good way of ensuring you don’t inhale any toxic compounds that may have entered your vape pen during manufacturing.

The cartridges of most vape pens will attach to the battery. Again, check your instruction manual for specifics.

Depending on what kind of pen you’re using, you might have to push a button to activate it. Other models will turn on automatically as you inhale. Put the mouthpiece in your mouth, take a drag, and enjoy.

The Benefits of Vaping Cannabis:

Cannabis patients and recreational users are embracing vape technology, and there’s plenty of reason to get excited about it. Here’s a short list of the biggest benefits of vaporizing cannabis:

You’re Doing Your Body a Favor

A 1988 study published in the New England Journal of Medicine also found that smoking cannabis was related to a 5 fold increase in blood carboxyhemoglobin levels in users, and showed that cannabis smoke contained up to 3 times more tar than tobacco smoke.

The same study also notes that cannabis is smoked in a very different way to tobacco. When smoking cannabis, user tend to take larger puffs, inhale much more deeply, and hold their breath for prolonged periods of time. In turn, they are exposing their lungs and respiratory tract to harmful chemicals for more times.

Other studies have also found smoking cannabis causes respiratory problems such as cough, sputum production, airway inflammation, wheeze, and others. For more information on cannabis smoke and its effect on the respiratory system, click here.

Vaporizing cannabis allows you avoid many of these respiratory issues by limiting your exposure to the chemicals that cause them. Because you’re not actually combusting cannabis in a vaporizer, you’ll find you’re avoiding roughly 95% of the chemicals found in smoke.

You Get A Stronger Dose

A study by California NORML and MAPS found that vaporizers can convert approximately 46% of available THC into vapor, while the average joint converts less than 25% of THC to smoke.

This again comes down to combustion and temperature. Cannabis begins to combust at somewhere between 392 and 446°F, depending on how moist the product is.

Vaporizers can be set to a temperature that maximizes cannabinoid extraction and minimizes the risk of combustion. A joint, on the other hand, offers no control over temperature,and can reach temperatures of over 2000°F. Hence, the smoke consumed through joints, blunts, bongs, pipes, and dab rigs, can consist of up to 88% non-cannabinoids.

You Use Less Cannabis

As we saw above, vaporizers are much more efficient at extracting cannabinoids. In turn, you get a stronger dose and can cut into less of your stash to get the desired effect you’re looking for.

A popular reason people choose to vape cannabis rather than smoking is that it is a lot more low key. The vapor released from both convective and conductive vaporizers is not as thick as smoke.

Vaporizing flowers tends to still produce a strong smell, but you won’t find yourself surrounded by a thick cloud. Vape pens charged with oil or wax tend to produce little-to-no smell.

You Notice More Flavors: Many of the delicate terpenes found in cannabis combust at relatively low temperatures. When smoking a joint, blunt, bong, or pipe, many of those terpenes are lost do to combustion.

Vaporizers, on the other hand, produce a much clearer, cleaner, and tasty experience, allowing many of those subtle terpenes to shine through.

Ready To Vape? Find The Best Cannabis Near You

So, now that you know how to vape and understand how a vaporizer works, make sure you get your hands on the best cannabis products near you.

Whether you’re after flower, concentrates, edibles, or tinctures, GreenRush combines over 7000 products in one place. Sign up today and you’ll get instant access to the best dispensaries in your area offering fast, discreet, and professional delivery.

Best of all, use the promo code below and you’ll receive $20 off your first FOUR orders. For more information on cannabis delivery, click here.