Legal Cannabis May Be Worth Over $7 Billion Next Year, Report Finds

The market for legal cannabis is growing, and a recent report demonstrates exactly how much. In The State of Legal Marijuana Markets, Arcview Market Research estimates that the legal cannabis industry in the US will be worth $7.1 billion by 2016.

The major legislative changes that gave birth to this industry only took place within the last couple of years, and the industry is still very much in its infancy. However, Arcview label legal cannabis as “one of the greatest opportunities of our time,” and say it is still early enough for investors to jump onboard and experience “huge growth.”

And they’re not alone; Eddie Miller, founder of eCann Media and GreenRush, labelled his move into the legal cannabis industry as one of his best business decisions to date. 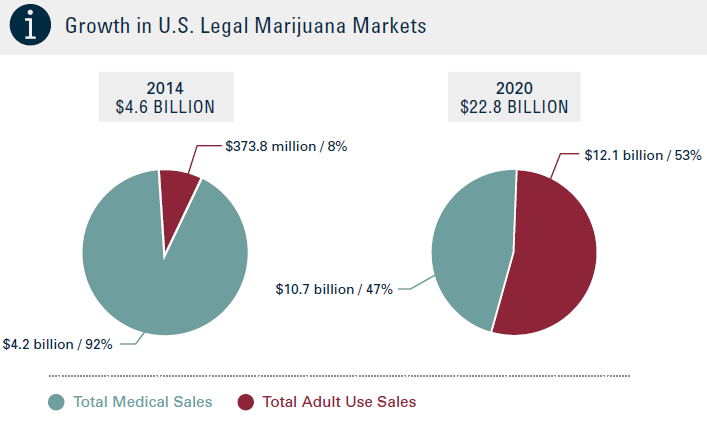 “Out of the 29 businesses I have owned over my entire career, I can say with confidence that GreenRush is the best, and we’re only 11 months into launching it,” he said in a recent interview for our blog. For the full interview with Eddie, check out our post on investing in cannabis.

In this article, we’ll be taking a brief look at the major findings of Arcview’s report, and tie this into a brief discussion on how such huge industry growth will benefit the job market.

Meanwhile, if you’re interested in working in this booming new industry, check out our post on cannabis jobs and make sure you attend Join The GreenRush, California’s biggest cannabis jobs fair, held at The Regency Ballroom in San Francisco on April 30th.

Here is our breakdown of The State of Legal Marijuana Markets (4th Edition): 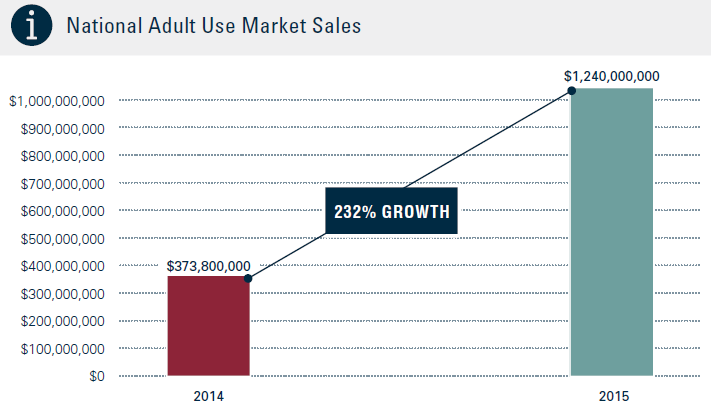 Arcview found that the most notable reason for the growth of the national cannabis market is the explosive increase in the number of adult use sales, with recreational cannabis sales across the country growing over 230% between 2014 and 2015 (from $373 million to $1.2 billion).

This pattern is expected to continue and the adult use market is only expected to grow bigger over the coming years. In 2016 alone, seven states including California, Nevada, Arizona, Massachusetts, Maine, Rhode Island, and Vermont, will be voting to legalize recreational marijuana use and to treat it much like alcohol and tobacco products. By 2020, adult use sales are projected to account for over 50% of the legal cannabis market.

Arcview also noted that the growth of the edibles market played a big part in this outcome. These products offer consumers an alternative to just cannabis flowers, and also carry a higher sales price. This means that the individual sale per customer in the edible/concentrate market may be higher than the individual sale for products such as flowers, and Arcview suggests that there is huge growth potential in the market for concentrates such as waxes, shatters, and edibles, especially as more states move towards legalizing cannabis.

Changing Attitudes and The Push for New Policies 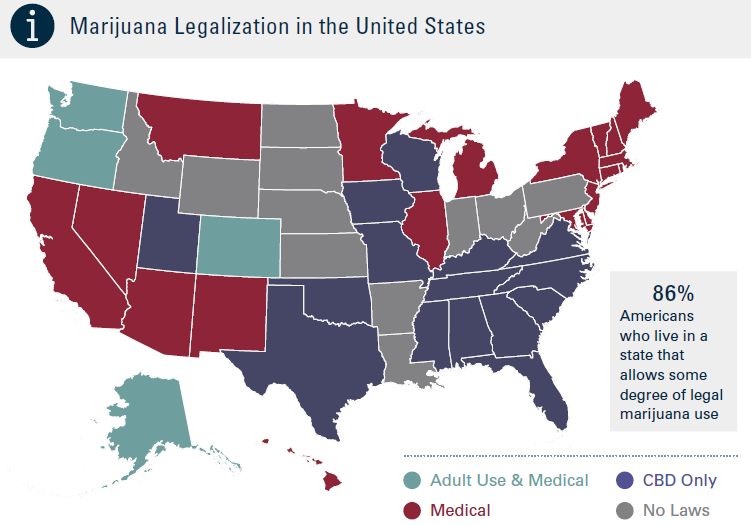 Arcview’s report also highlighted a growing change in attitudes towards cannabis and the use of cannabis for both recreational and medicinal purposes.

Quoting various polls and surveys, the Arcview report showed that only 36% of Americans supported completely legalizing cannabis in 2005. That number is currently sitting at 58%, with over 80% of people voting in favor of legalizing cannabis at least for medicinal purposes. The report also found that support is highest among adults aged 18-34.

This change in attitude towards marijuana and marijuana products is driving a political shift across the country. States are challenging the federal status of the substance and are seriously reflecting on their own cannabis legislation.

With twenty-three states already permitting medical cannabis use and four states and the District of Columbia allowing full recreational use, over 85% of Americans currently find themselves living in a state where cannabis has been legalized to some extent. The report claims that this trend will only grow, and labels 2016 as “the tipping point in which a majority of U.S. states transition from cannabis prohibition to some form of regulated legal markets.”

Legalization Shown to Be A Strong Alternative to Prohibition 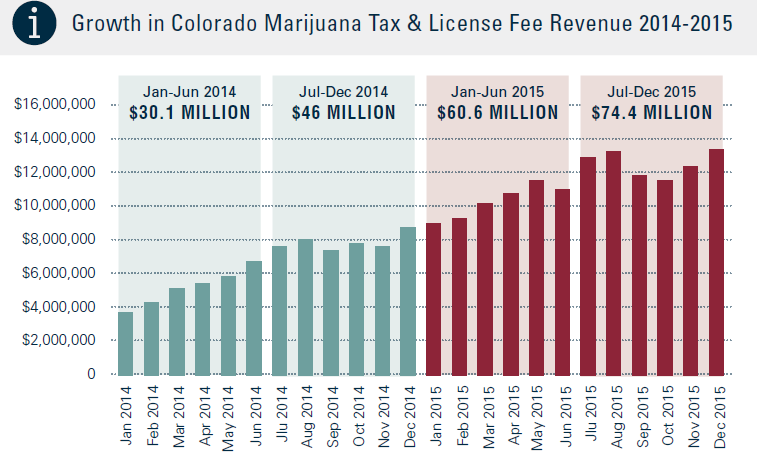 Arcview’s report relies heavily on data from the markets in Colorado and Washington to demonstrate that legalization and regulation proves to be a solid alternative to prohibition, benefitting both consumers, non-consumers, and the state.

Colorado legalized cannabis for recreational use in 2012 through the enactment of Amendment 64. In 2014 alone the state raised $76 million in tax and licensing revenues, and is expected to generate $135 million in 2015. In Washington, the first year of legal sales hit $257 million and generated $70 million in tax revenues despite product shortages and pricing instability.

In August 2015, adult use sales in Colorado exceeded $100 million for the first time. In Washington, monthly adult use sales grew over 290% between January and December, from $18.8 million to $75.3 million.

Arcview also made it clear that many of the fears held by prohibitionists against legalization did not come about in states like Colorado and Washington:

“Crime is down, falling prices have made the legal market increasingly competitive against the black market, regulatory compliance is high as businesses dare not risk losing their valuable licenses, and product quality and diversity has increased,” the report states.

“The success of these markets has provided the first clear evidence that legalization is a viable alternative to prohibition, a factbased counterpoint to the argument that it is in society’s best interests to sustain the prohibition of cannabis.”

In its report, Arcview also made some estimates on what trends we can expect to see over the next year in both national and state legal cannabis markets.

The report claimed that there is a 92.8% chance that a majority of states will have some kind of legalized cannabis market by 2016. It also expects for the current market to become more competitive, especially in regard to product prices, as the industry continues to grow and investors and wholesalers jump onboard to profit from it.

“As new growers have entered the market, competition on price in both wholesale and retail markets has increased significantly; this trend is expected to continue in 2016,” the report states.

Arcview also suggests that 2016 will see a strong emphasis on compliance and product regulation. This trend is already taking place, with states like California already signing-in new legislation that will provide more regulation of cannabis and cannabis products.

Finally, the report also suggested that there will be a move in 2016 to integrate more technology into the legal cannabis industry.”With the millennial generation driving a large portion of cannabis market growth, technology is poised to have a major impact in overall industry evolution in 2016,” it states.

Some of the most notable technological advancements are and will be taking place in the following areas:

Arcview’s report on the legal state of cannabis markets obviously boasts some very impressive figures. However, one topic that the report did not touch on is how the growth of this industry will affect the job market.

As we’ve already mentioned, the cannabis industry is still in its infancy. However, as it continues to grow and evolve, there will be an obvious need for professionals to fill a variety of roles in wholesale companies or manufacturers as well as retail businesses.

And we are already seeing this happen. On March 28th, the Marijuana Business Daily reported that the number of marijuana-related occupational licenses issued in Colorado grew 68% between 2014 and 2015, which means more people are seeking qualifications to pathe their way into this new industry.

We also see this trend online. Indeed.com, an online job board, currently advertises over 470 cannabis jobs in a variety of areas. In January 2015, Weedhire, a cannabis-specific job board, reported an average of 70.25% growth in employment opportunities across four main sectors of the industry.

And it shouldn’t stop there. As the legal cannabis industry evolves to become more regulated and sophisticated, more and more cannabis companies will be looking for professionals to help them meet a growing demand for their products and/or services.

If you’re interested in working in the cannabis industry, make sure you read our previous post on cannabis jobs for a rundown of some of the opportunities within the industry. Also, make sure you attend Join The Green Rush, California’s biggest cannabis jobs fair, held at the The Regency Ballroom in San Francisco on April 30th.

Looking for the best medical cannabis near you? Sign up to GreenRush today for fast, affordable, and discreet delivery from the best dispensaries in your area. Plus, use the promo code below to get $20 off your first FOUR orders.

by greenrush
1 month ago
Read More