The Ultimate Guide to Marijuana Extracts

Been browsing GreenRush menus and getting confused by all the talk about hash, BHO, crumble, tinctures and waxes? In this post we take a detailed look at the different kinds of marijuana extracts currently available on the market and what makes them unique.

So whether you’re already a fan of cannabis concentrates or you’re a newbie looking to find out what all the hype is about, read on to find out all you need to know. And remember, sign up to GreenRush today and get cannabis delivered from the best dispensaries in your area in minutes.

What are Marijuana Extracts? 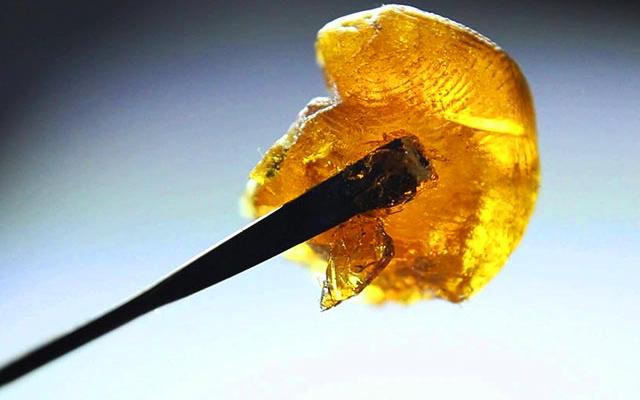 The term “marijuana extracts” basically refers to any product that is made by extracting desirable compounds (such as cannabinoids and terpenes) from the cannabis plant and combining them in a concentrated form.

In cannabis, the compounds manufacturers are looking to extract are cannabinoids (such as THC, CBD, CBN, etc) and terpenes (such as pinene, limonene, etc). Cannabinoids are unique compounds that give cannabis its medicinal properties, while terpenes are mainly known for giving cannabis the aromas and tastes that we all treasure, although they also have medicinal properties of their own.

By extracting and concentrating these compounds, manufacturers are all striving towards one common goal; to create a pure product with high concentrations of the chemicals that give cannabis its distinct effects.

The process of extracting and concentrating these compounds, however, isn’t easy. The purity and quality of the end product is governed by countless variables, including everything from the chemical profile of the strain and the particular extraction method being used.

It’s All About The Trichomes All marijuana extracts are made by separating the trichomes (those sticky, hair-like crystals on your buds) from the plant matter. These trichomes contain the highest concentration of cannabinoids and terpenes in the cannabis plant, meaning they also harness the plant’s maximum medicinal potential.

Scientists hypothesize that the trichomes found on cannabis work similarly, as a defense mechanism.

There are a variety of ways to extract cannabinoids and terpenes from the cannabis plant. The various methods are usually categorized by whether or not they use a solvent to separate the trichomes from the plant matter:

Although the term “solventless”  technically refers to a concentrate that is made using an extraction method that doesn’t rely on any kind of solvent, the term is generally used by the industry to refer to products that are made without the use of chemical solvents such as butane or alcohol.

The most common solventless extraction methods include: Technically, the term “solvent-based extract/extraction” refers to any product which is made using a solvent, in which case any marijuana extracts made using CO2 or water extraction methods would fall under this heading.

However, the cannabis industry generally uses this term to refer to cannabis extracts made using chemical solvents such as butane and ethanol. The most common solvent-based extraction methods include: There are a variety of cannabis concentrates currently available on the market. Here’s a simple guide to help you understand the differences between them: Kief is the oldest form of cannabis extract and is the main ingredient used to make hash. Using a dry sifting technique, frozen flower is sifted through fine mesh screens to separate the trichomes from the plant matter. The end product is a fine powder with a high concentration of cannabinoids and terpenes.

Regular flower, for example, tends to reach a maximum THC concentration of 25-30%, while good quality kief can reach up to 60%.

Kief is often heated and compressed into big blocks, popularly known as hash. The color of the kief or hash will often speak for its purity; a high-quality concentrate is usually golden, while lower quality products will have a greenish tinge, which indicates that it is contaminated with more plant matter. Ice water hash is, you guessed it, a type of hash. The term refers to hash that is made using a ice-water extraction method.

Frozen cannabis trimmings are combined with cold water and ice and agitated (either shaken or stirred) in order to separate the brittle trichomes from the plant matter. The mixture is then sifted through various fine sieves and dried to form a granular concentrated that can be pressed or molded by hand.

Rosin is a cannabis concentrate made using a heat and pressure extraction method which can be easily done at home. Cannabis flower is placed inside parchment paper and pressed between two hot sheets of metal (such as the panels of a hair straightener) to release a sticky, golden oil that’s very similar to shatter.

CO2 oil is the end product of CO2 extraction, or supercritical fluid extraction. This method, relying on complex and very expensive equipment allows for one of the purest extractions of cannabis compounds currently available on the market. CO2 oil is a beautiful amber/gold color and is jam-packed full of cannabinoids and terpenes.

The oil is mixed with food grade propylene glycol or glycerin to keep it liquid at room temperature and is most commonly vaporized in vape pens, although it can also be frozen and dabbed using a regular dab rig.

Hash oil is arguably the most popular marijuana extract currently on the market and is most commonly made using the butane extraction method we described earlier.

Hash oil is available in various consistencies which are determined by minute factors in how the cannabinoids and terpenes were extracted from the plant.

Here are some of the most common types of hash oil and how they differ from one another: 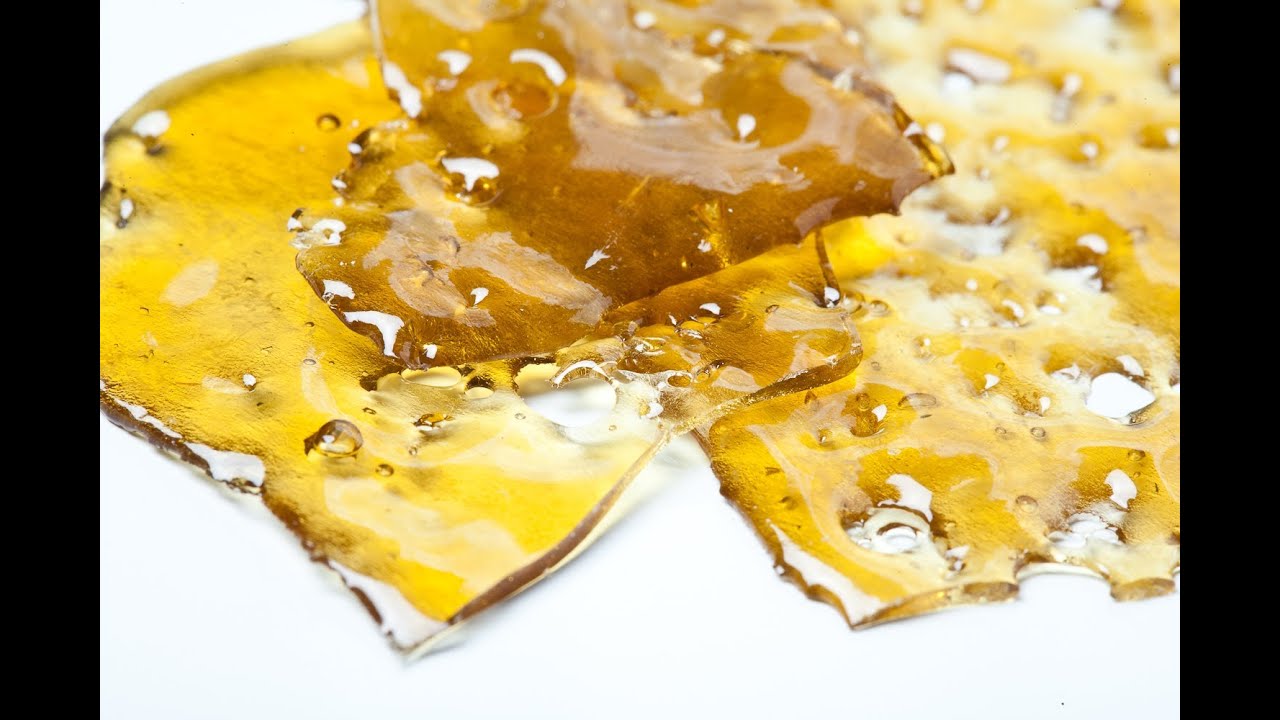 Shatter refers to hash oil that has a similar texture to glass and commonly shatters when it is dropped or manipulated. It is clear and usually amber or golden in color and can have a potency of up to 80% THC. Due to its transparency, many mistake shatter as being the purest type of cannabis concentrates.

However, shatter simply owes its transparency to the fact that it’s molecules have been left undisturbed and not agitated like the molecules in wax, crumble, or bubble hash.

During the manufacturing process, shatter is purged of butane by heating it (often under a vacuum) until the butane evaporates. Because the product isn’t agitated, it’s molecules are undisturbed, making for a transparent concentrate.

The consistency of hash oil is governed by factors such as the heat it was exposed to during manufacturing, whether it has been decarboxylated, and it’s terpene contents. Here are some different names applied to concentrates like shatter but with different consistencies:

Cannabis wax has a sticky texture which, much like shatter, can differ in consistency. The most obvious difference between shatter and wax is that wax isn’t transparent. Instead, it can have a creamy white color, similar to honey when it solidifies.

Wax is opaque because, unlike shatter, its molecules have been agitated. While shatter is just heated during the purging process, waxes are usually whipped. The agitation from the whipping is what creates this non-transparent concentrate.

Like shatter, wax is available in a variety of consistencies which are referred to by various names. These include:

Tinctures are marijuana extracts made by soaking cannabis trimmings in alcohol. The finished product is a potent extract which is usually applied in drops and administered orally. According to Leafly, tinctures were the most common form of medical cannabis prior to prohibition in 1937.

Get Marijuana Extracts Delivered in Minutes

So, now that you know about the various ways cannabinoids and terpenes can be extracted from the cannabis plant and understand the differences between the most popular marijuana extracts out there, it’s time you know how to order them.

Sign up to GreenRush today using the promo code below and receive $20 off your first FOUR cannabis orders. GreenRush instantly connects you with the best dispensaries near you, allowing you to get the best cannabis delivered in under an hour.